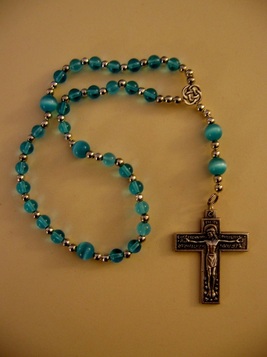 The Anglican Rosary (Anglican Prayer Beads) is used chiefly by Anglicans within the Anglican Communion, as well as by those in the Continuum, and by members of Anglican Ordinariates within the Roman Catholic Church. Its usage has spread into other Christian denominations, including Methodists, the Reformed, Lutherans, Moravians, Mennonites, Baptists, Adventists, Presbyterians and the Orthodox. The Anglican Rosary is often used in ecumenical contexts of the universal Christian Church, and for this reason, they are often called Christian Prayer Beads.

Symbolism of the Rosary/Prayer Beads

The configuration of the Anglican Rosary relates contemplative prayer to many levels of traditional Christian symbolism. The prayer beads are made up of twenty-eight beads divided into four groups of seven called Weeks. In the Judæo-Christian tradition, the number seven represents spiritual perfection and completion. Between each Week is a single bead, called a Cruciform Bead as the four beads form a cross. The Invitatory Bead between the cross and the wheel of beads brings the total number of beads to thirty-three, the number of years in Jesus’ earthly life.

Praying with the Rosary/Prayer Beads

The standard Anglican Rosary consists of the following pattern, starting with the cross, followed by the Invitatory Bead, and consequently, the first Cruciform Bead, moving to the right, through the first set of seven beads to the next Cruciform Bead, continuing around the circle, praying the Weeks for each bead. One concludes the Anglican Rosary by saying the Lord's Prayer on the Invitatory Bead and finishes with the final prayer assigned to the Christian Cross. The entire circle is done thrice, signifying the Holy Trinity:

The Cross
In the Name of God, Father, Son, and Holy Ghost. Amen.

The Invitatory
O God make speed to save me (us),
O Lord make haste to help me (us),
Glory be to the Father, and to the Son, and to the Holy Ghost, as it was in the beginning, is now and ever shall be, world without end. Amen.

The Cruciforms
Holy God,
Holy and Mighty,
Holy Immortal One,
Have mercy upon me (us).

The Weeks
Lord Jesus Christ, Son of God,
Have mercy on me, a sinner.

The Lord's Prayer
Our Father, who art in heaven,
hallowed be thy Name,
thy kingdom come, thy will be done,
on earth as it is in heaven.
Give us this day our daily bread.
And forgive us our trespasses,
as we forgive those who trespass against us.
And lead us not into temptation,
but deliver us from evil.
For thine is the kingdom,
and the power, and the glory,
for ever and ever. Amen.


You can pray the Anglican Rosary by clicking through our gallery below and reciting the said prayers: 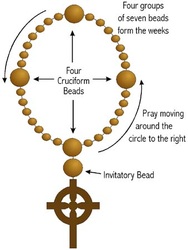 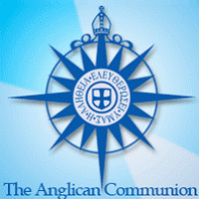